TEA AND HOPE AT THE #UUP21 CONFERENCE 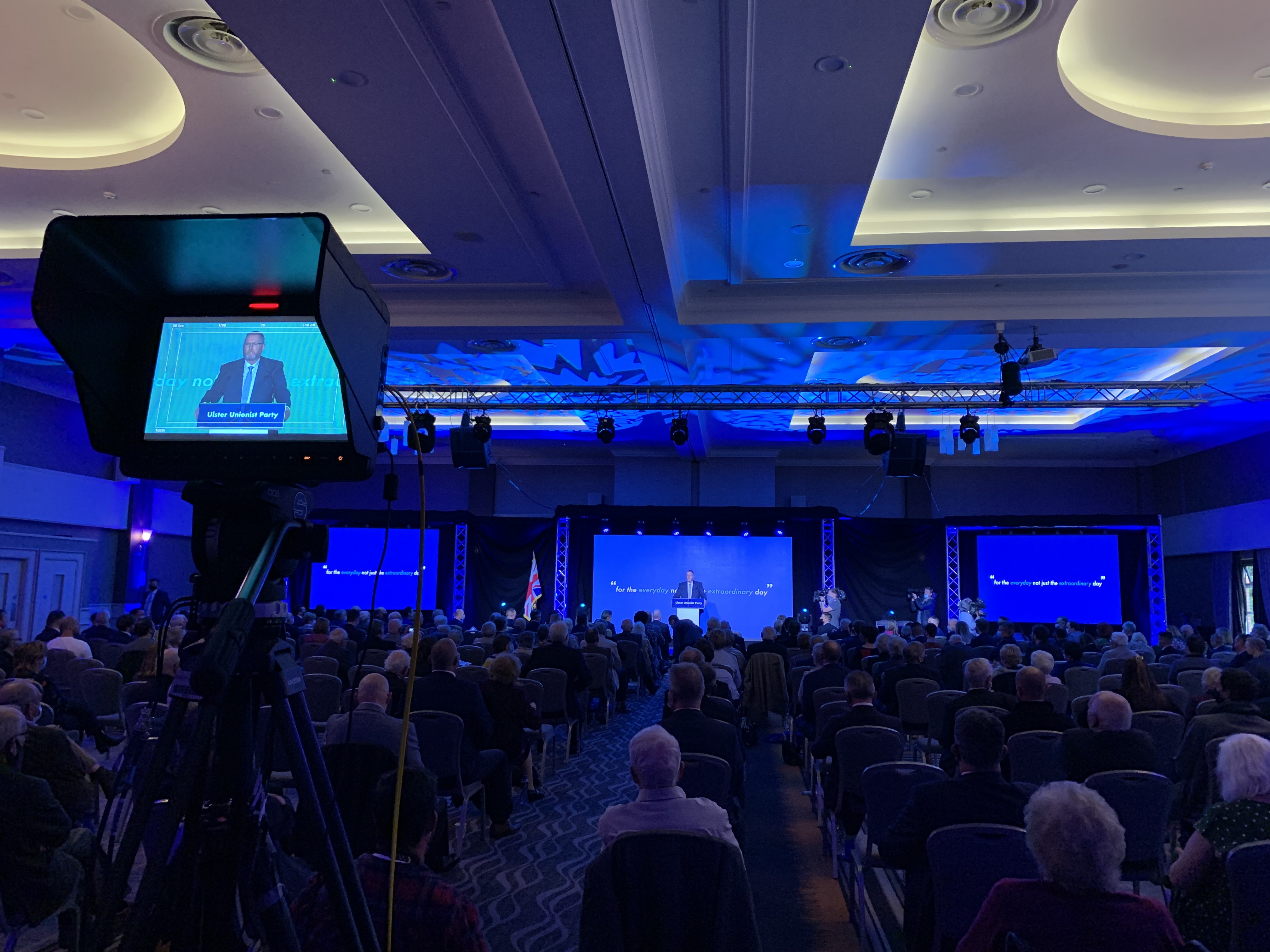 I should consider taking up residence at the Crowne Plaza hotel in Shawsbridge. It feels like I am never out of the place.

I like to arrive at political party conferences early so I can watch the day unfold from the very start.

On Saturday morning on the way over to #UUP21 my taxi driver tells me he likes what Doug Beattie is doing with the Ulster Unionist Party.

It’s something different, he says. He’s disappointed with how the DUP treated Arlene Foster, who has passed her Stormont seat to former party press officer Deborah Erskine, and is carving out a place for herself in the media through a Local Women magazine column and a GB News presenter role.

As we are pulling into the hotel site cars are already being directed into the overflow car park. So, off I go.

I have to show photo ID and proof of double vaccination in the foyer and then I am off upstairs to get my media wrist band.

For those who need to take a covid19 test they are available.

The first person I bump into is Belfast North candidate Julie-Anne Corr-Johnston who has been keeping busy since I visited her at the UUP’s new office which opened up on the Shore Road a couple of weeks ago. (A POST ON THIS TO FOLLOW SOON)

She buys me a cup of tea for which I am very grateful. Julie-Anne is gearing up for her speech to conference, and after leaving the PUP, and thinking her politics days were over, is feeling energised by Doug Beattie’s leadership. 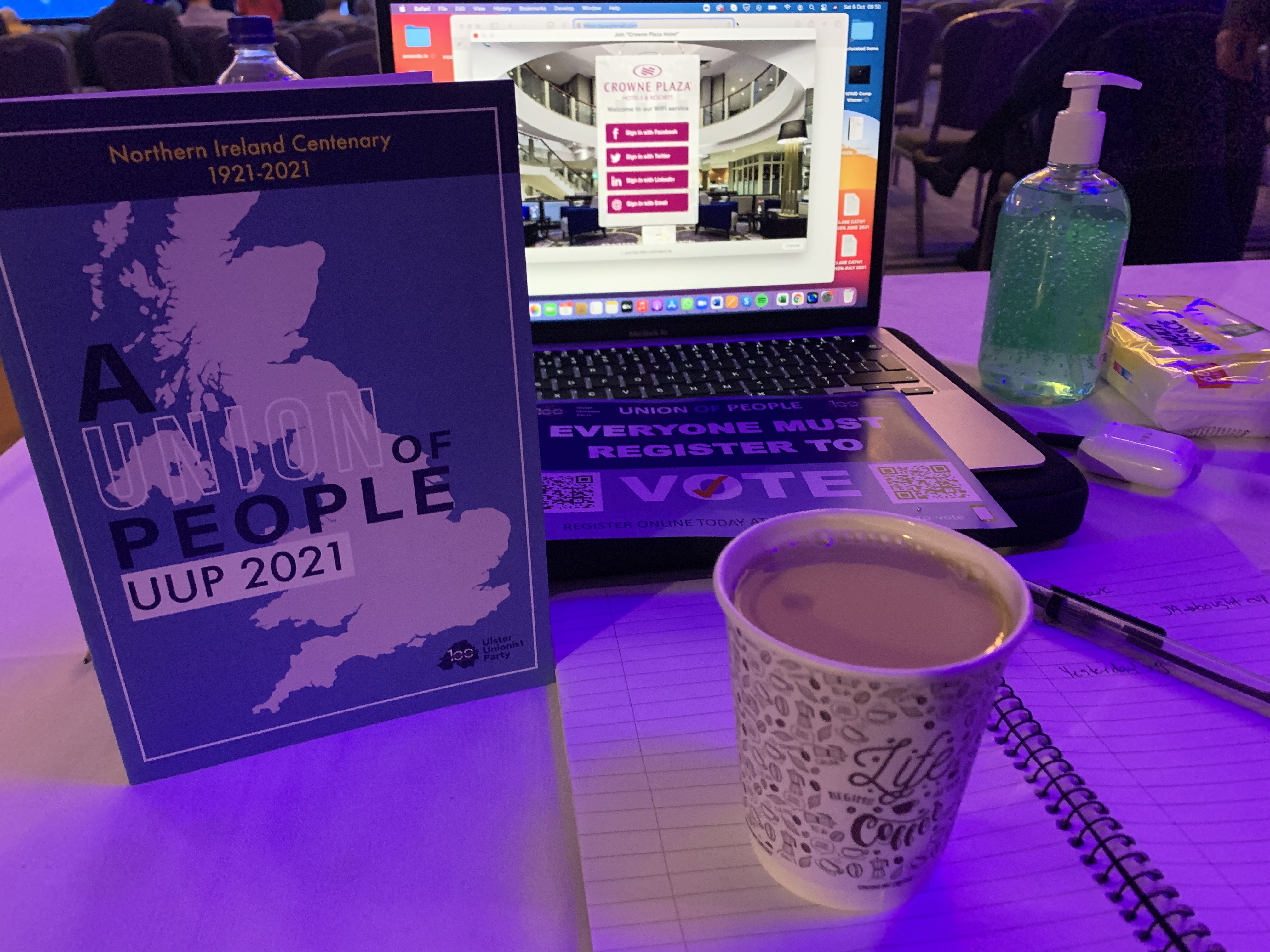 The main conference room has a bit of a nightclub look to it.

It’s blue. It’s dark. If someone had passed me glow sticks and a double Vodka and Red Bull it wouldn’t have seemed out of place except I am doing Sober October! All donations to Aware NI depression charity gratefully received: https://www.justgiving.com/team/amandaandryan

I remark to colleagues that it feels like a rave is about to start. Not wanting to get carried away I compose myself, and through the darkness find my seat for the day at the press tables, and have a nose around.

The stage has three giant screens emblazoned with blue tones union flag graphics showing a map of the six of Ulster’s nine counties that make up Northern Ireland. The rest of Ireland has vanished. I always think of the Rose Neill hair meme when I see this chopped map version of our island.

A pristine union flag is on the stage and a UUP podium for speakers to address the audience which runs to 300+ people. And yes I did count the chairs.

The room is cold. Not in atmosphere, but, mindful of covid mitigations, because the windows have been opened in the main hall to improve ventilation.

There is definitely a different energy around #UUP21 than previous years, and money has been tipped at the conference, which feels more like an election rally than a policy making event.

The majority of the delegates are still on the more mature, more seasoned side of things, but younger people are scattered everywhere.

Later he can’t resist a wee dig at the DUP, suggesting the UUP told the hotel they “will be better behaved” than the other crowd were over the summer.

He tells delegates after 20 years of the DUP being the largest unionist party it is the UUP’s “task to rebuild and secure the future of the union”.

He says “an election, whenever it comes, will be a defining moment for unionism”.

The conference then hears from a range of candidates.

In a deeply personal speech from Julie-Anne she reflects on the challenges in her constituency, and says election battles need to change from a ‘constitutional show of strength to a vote for socio-economic change’.

My second cup of tea arrives courtesy of UUP deputy leader Robbie Butler who sweetens the deal with a mince pie. My first of the season! I stick by the rule of the late John Cole who said journalists are allowed to accept gifts if they can be consumed within 24 hours.

Next up is UUP Health Minister Robin Swann who proved popular in the hotel all day with delegates, and exhibiters asking for photos with him and so on.

There is a standing ovation in the main conference room when it is referenced that he is under threat from extremists in society.

His speech focuses on the pandemic and the future. Claims about the vaccine programme being a benefit of Northern Ireland's place in the union could be easily challenged if you look at vaccine uptake here compared to the rest of Ireland and other jurisdictions.

And of course there is no mention in the speech of the traumatised women who had only truckers for company when they had to make lonely journeys by ferry to access abortion services in Britain during lockdown, but the audience loves him.

South Down candidate Cllr Jill Macauley uses her speech to reference women in politics, something the UUP has clearly recognised it has to do much much better at.

Next up it’s an entertainment interlude to 'celebrate' Northern Ireland’s Centenary, which included a theatrical performance, a piper, dancing, and the King's Speech.

You can sense the party is going for broad appeal with its #unionofpeople campaign. It is trying to be as inclusive as possible but some contradictions remain around the Irish language and other matters.

Talking to delegates over the lunchbreak there are young progressive unionist people who are not hung up on the issues that exercise some older more hardline elements.

I get the sense even some of the more conservative younger people are, as one described to me, “willing to park their differences with Doug on some issues" for “the betterment of the union”.

The lunch arrangements are too much hassle for my liking so the Butler service mince pie will have to sustain me until I am done for the day.

One young unionist gets a mate to take their photo at the conference podium. Future leaders getting a feel for the showbiz of it all, perhaps.

After lunch Belfast South candidate Stephen McCarthy introduces the UK-wide segment of the conference which includes the view from NI, Scotland, Wales and England.

“We are the party which gives hope not fear” UUP deputy leader Robbie Butler said.

The Scottish and English speakers do not like nationalism.

It is described in some unrecognisable ways that could terrify different listeners but nobody bats an eye. Perhaps the penny hasn't dropped yet about relying on non-unionists in the future to save the union.

The view from Scotland #UU21 from Scottish Conservative and Unionist Party Chief Whip Stephen Kerr MSP. He doesn't have much good to say about nationalism wherever it is found. He says it is "ugly". He describes it as "petty, meanspirited and holding back Scotland".

Then for Doug Beattie’s leader’s speech. You can read the details here:

The song on the UUP #unionofpeople #ppb is original material. Lyrics below. You can watch it here: https://t.co/wbQHEFnaIn pic.twitter.com/Cgt764R2fu

So, what next? How will the UUP do at the next election? It’s going to be fascinating to watch it all unfold as Doug Beattie is trying to offer a clear alternative to the DUP. When you shuffle the chairs around how different really are they?

Will more conservative UUP voters move away from the party, and will they gain back others who drifted to the DUP, Alliance, and other parties since 1998.

The next Assembly election may not be until May 2022 but campaigning started when parties scented blood over Arlene Foster’s ousting back in the Spring.

“Everyone is already out there,” it was remarked to me by one senior unionist.

There is a sense that all parties know "it’s going to be brutal".

And “on the ground’, as they say, UUP members and reps can feel there is a positive "shift" in the electorate’s attitude to them under Doug Beattie’s leadership, but also that there is a "hardening of attitudes" among others.

The UUP is now doing what unionism should have been doing years ago. If unionists want to prolong the existence of the union they have a lot of work to do.

The UUP is making efforts to take a more progressive, welcoming, path.

Now they have to have the metal to stick to it, and see whether the brand of unionism they are offering chimes with the electorate - or if they might have to, as Doug Beattie pointed out when he first became leader, “shrink to grow".

A lot can happen between now and election day but certainly the feeling in the room is hopeful and positive.