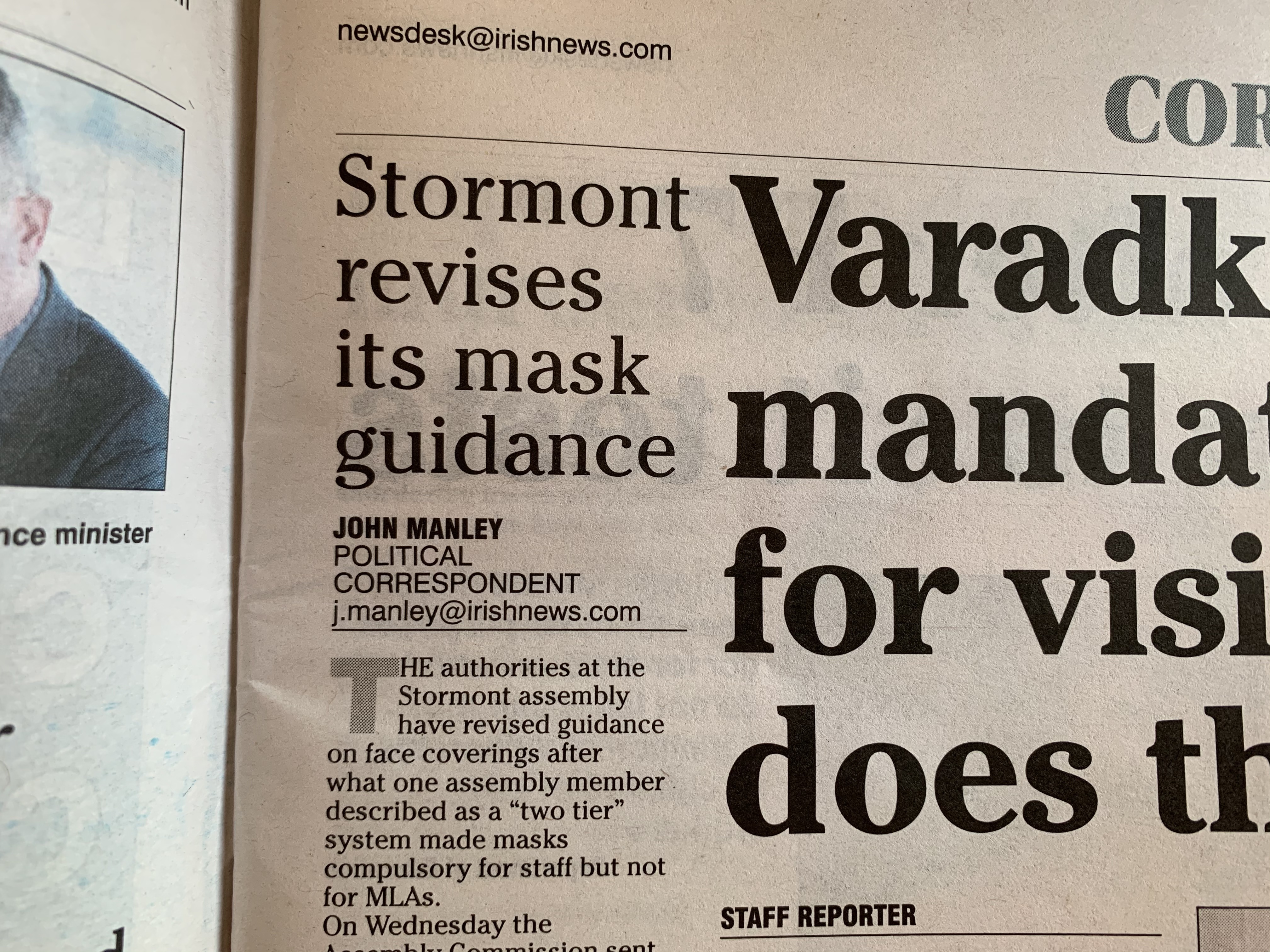 This all started with a disgruntled member of Assembly staff leaking a letter to me indicating masks were compulsory for them but optional for politicians. I posted the following on my social media on Wednesday night. See: Twitter & Facebook 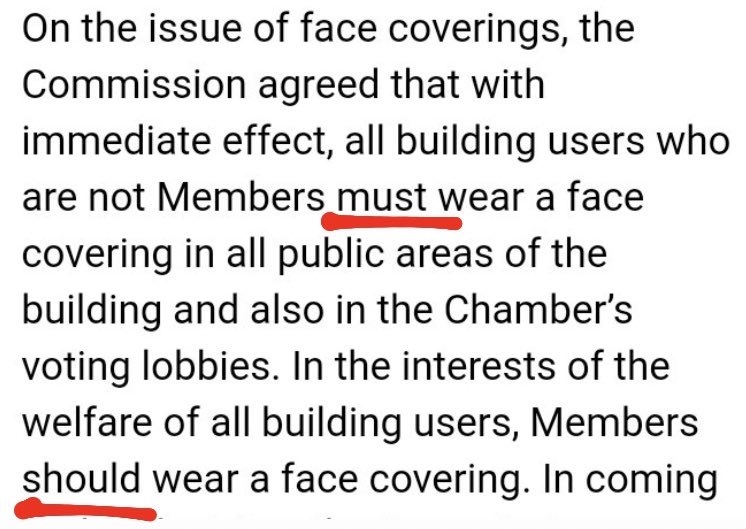 Then on Thursday morning I was on the Frank Mitchell Show on U105 to talk about it.

Public health expert Professor Gabriel Scally noted: ”Bizarre and unacceptable. Everyone must wear masks in Stormont, the Northern Ireland Assembly building, except the politicians. For politicians, the policy is that they 'should' wear a mask. This dents the credibility of the whole Assembly.” See: Twitter

And People Before Profit MLA Gerry Carroll said: “Unless MLAs/Ministers have medical conditions that prevent them, they should be wearing masks. Cannot have one rule for MLAs and another for everybody else , including Assembly staff!” See: Twitter

So there it is. 2021 journalism. A leaked letter, social media posts, expert and political reaction, a radio station, a tv station and a newspaper: Result

From the original leaker: “Wow, result is right! Thank you for everything you did to put this farce right!”

UPDATE - I went back to double double check details... 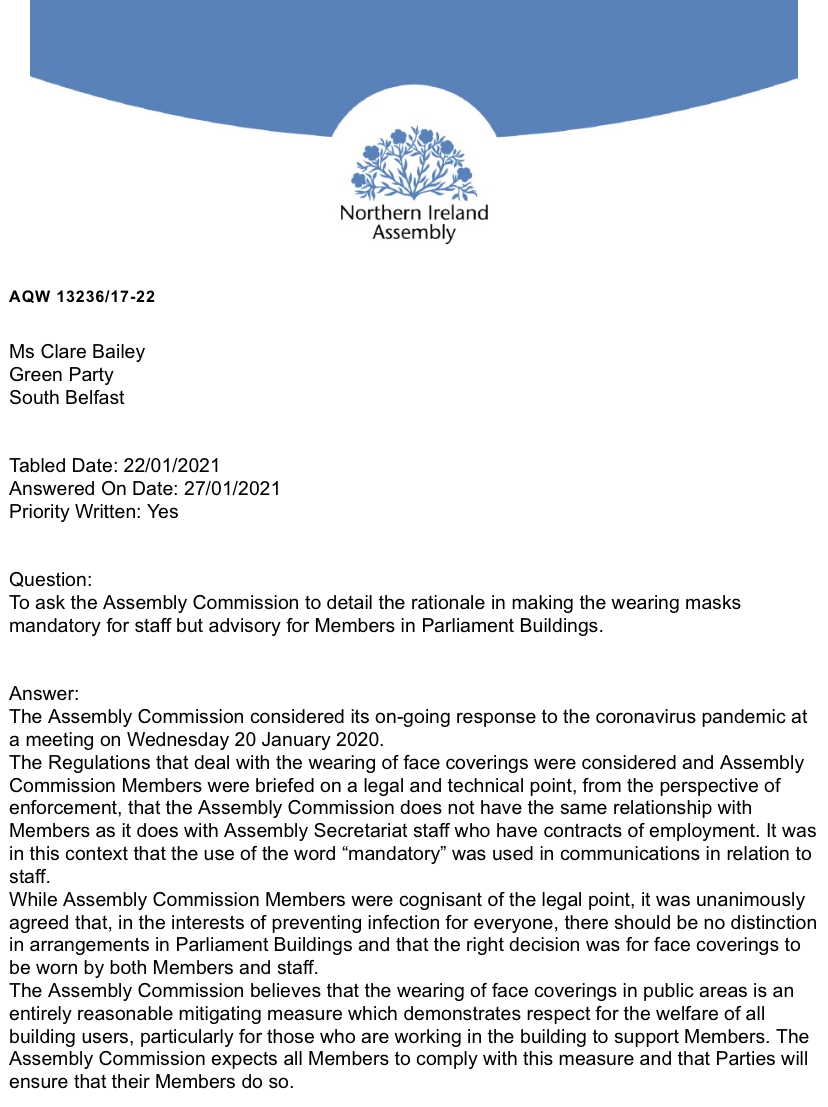 This was the response today, February 3rd, and MLAs were also written to.

An Assembly Spokesperson said: “There is a difference between the relationship the Assembly Commission has with the staff it employs and with MLAs with whom the Commission has no such contractual relationship. Notwithstanding this point, the Commission decided on 20 January 2021 that, in the interests of preventing infection for everyone, it is right that face coverings are worn by all building users in public areas of the building.

“The Commission expects MLAs to wear face coverings in public areas and for their parties to ensure that they do so. The Speaker has indicated to the Commission that he is happy to pursue the matter with the relevant Party Whip and/or the individual Member involved, if required, if a Member was not wearing a face covering in a public area.

“In addition, Rule 10 of the Assembly’s Code of Conduct sets out that:

“You shall observe and comply with the Rules on All-Party Groups and any policy, guidance or instructions of any kind approved by the Assembly, or issued by the Assembly Commission or Assembly secretariat staff on its behalf or with its authority.”

“Alleged breaches of the Assembly Code of Conduct are for the Commissioner of Standards to investigate.”