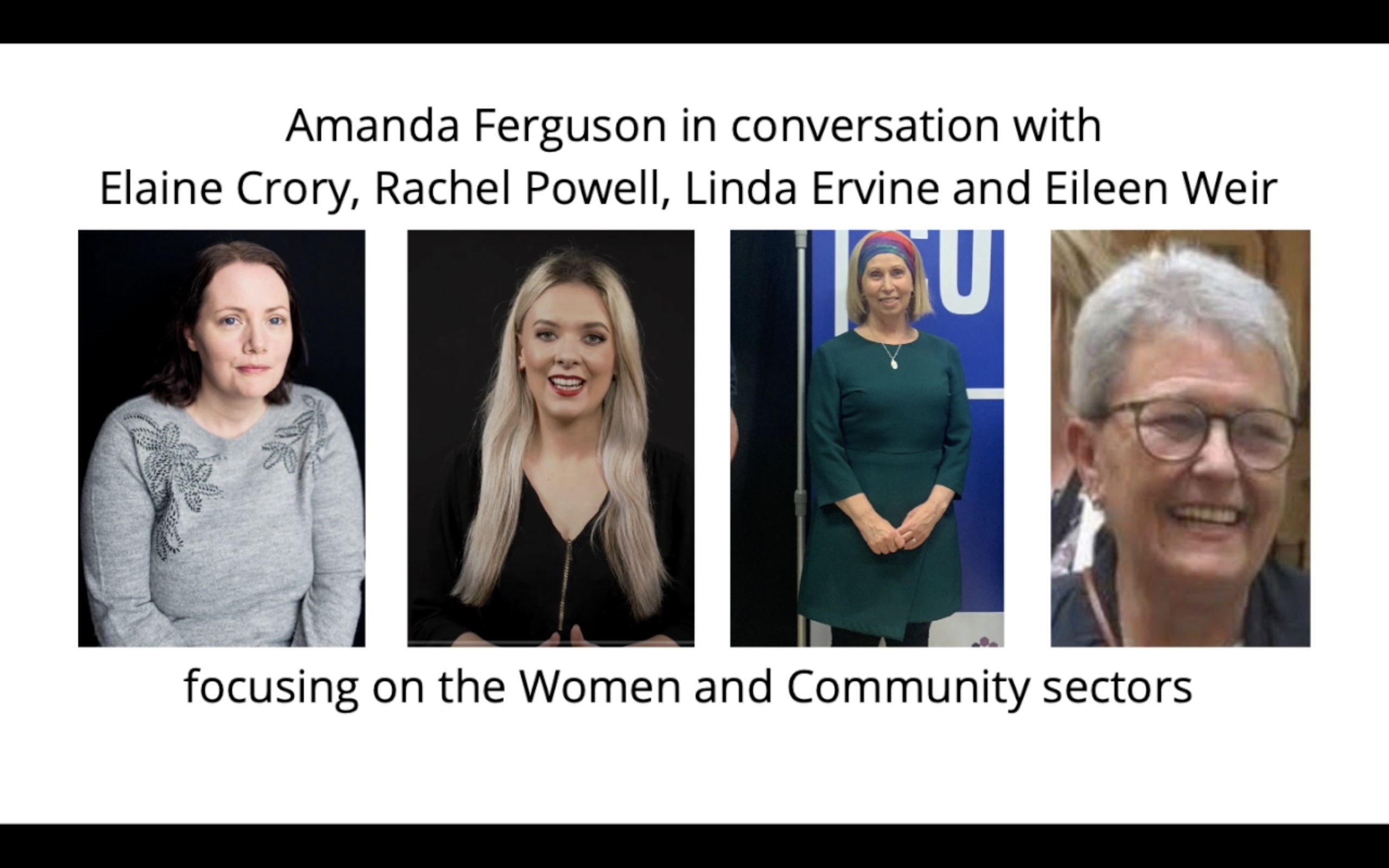 Amanda Ferguson in conversation with Elaine Crory, Rachel Powell, Linda Ervine and Eileen Weir is part of my media representation interview series - exploring the media landscape, the role of women in the media, marginalised voices, and more.

I spoke to Elaine, Rachel, Linda and Eileen at the end of August about the challenges facing the women and community sector and their relationship with the media, and social media.

Elaine, Rachel, Linda, and Eileen introduce themselves. Then:

4 minutes – NI as a very male place. The role of women being minimised. How would you describe the society we live in? Women do all the work and men get all the praise. Historic role of women’s centres. Men at the table. Women in leadership. Under represented. Depressing 20 + after GFA we are segregated – housing education and more. Tiny vocal minorities get a big say and shape narratives that don’t reflect here. Most people get on. Difficult to talk about gender. It gets lost. Being behind. Intentional segregation. Infuriated. NI a place apart. Divisive issues get a platform. The two communities narrative dominate. Put in your place. Backlash disproportionate. Frightening. Public narrative doesn’t reflect reality. Women are not being served.

10 minutes – Role of the media. Challenges. Engagement. Elevating voices. Abuse. Special interest issues. Women’s issues left to the side. Visibility of women in the public arena and media equals abuse. Reluctance to engage. Accusations of pushing an agenda. Expertise. Segregating women’s issues. Daunting. Media engagement makes me want to stop doing it. Abuse every single time for doing my job. Class. Disability. No interest from media. Controversy equals publicity. Zero interest. Men’s narratives. Domestic and sexual violence. The other side. Evidence. False equivalence. There doesn’t always have to be another side. One side against the other. Media portrayal. Experts going up against people with dodgy opinions. Demeaning. Reasons why women don’t want to engage. Good experienced. Mixed experiences. Good news stories. No interest at all. No nibble, never mind a bite. Stressful experiences. Cancelled. 30 seconds meaningless and pointless. Headlines wrong. People don’t read the story. Sensationalism. Social media promotion and control. Tough place to be. Public eye. Jobs. Insults. Lies. Misrepresent. Fair game. Positive experiences. Controversy turns bitter. We are speaking on behalf of people we represent. Women we are working with across the province. Attack the individual. Consultations. Lobbying. Information coming from a good place. Women’s Movement. Fear for my life. Conduit. Fear of women to speak out. Democratic society.

25 minutes – Online abuse. What way does it manifest, and what toll does it take? Being careful. Women’s lives at risk. Becoming targets. Better way of live. Experimenting. Hard when threat is there. Work under the radar. Last time we had to do that was prior to the GFA. Fear. In it for the money. Lies. Undermining women. Undermining message. Intimidation. Posters. Police. Small minority still living in the 1980s.

Abuse being disruptive. No legal of civil remedy. Insinuation. Sue for libel. Defamation. Working for charities. Nothing can be done. Gender is the common theme. Find anything to tack on to undermine further. Banned from having sex. Who would want you? Twisted. Threats. Expect abuse. How dare you, as a woman. I can’t do it any more. Marginalised women. Use personalised lived experience against women. Don’t blame women for not wanting to engage. Paramilitary threats. Horrific stories of abuse. Least access to justice for trying to improve things for women. Daily basis. Weekly basis. Abusers are adaptable. Undermine credibility. Contrary person. Feeling emotionally upset. Put it in a box. Frustration.

Don’t want young women to have to develop a thick hind for abuse. The last sting of a dying wasp of the patriarchal society. Things are changing. Moving on. Anger.

37 minutes – Solutions? Keeping going? Damage to public awareness. Improving standards in online versions of headlines. Not designed for maximum clicks. Moderation of online comments or switched off. Sensitive stories. Get rid of false notion of balance where it is not needed. Good approach on Talkback recently. Hearing from experts. Calling out misogyny. Naming it. What about men? VAWG. Misery loves company. Age appropriate Relationship and Sex Education. Made up interviews. Dangerous presentation. Stop putting people’s experience and right to exist up for debate. Actively harming. Media training. Policing social media better. No social responsibility. Bear pits. They want to destroy you. Faceless nameless people should not be allowed. Libelled on numerous occasions. Open season. Only if you have money or power you have comeback. Legal protections needed. The internet has failed women. No accountability even if identity attached. Local legislation to deal with it. Misogyny. Misinformation. Who is missing from the conversations? People getting on with it. Positive people. Loudest negative voices get attention. Peaceful people’s voices. The majority. Fact checkers. Impact of the online abusers followers. Rile people up. Damaging. Headcases. Brick, petrol bomb, bullet through your window. No redress. I felt fear. Legitimate. Personal safety. Unsafe in my own home. Taking away human and civil rights. Redress. Free for all. Lawlessness. Out of control. Disproportionate impact on women. Stories about how young girls are abused through social media. Staying off social media. Women as the enemy. Solution of rooting out issues that cause behaviour in the first place. Online. Address misogyny.

1hr – Solutions to address misogyny. RSE. Not just romantic relationships. Respect as a building block. Talk about misogyny seriously. Hatred of women. Only want to talk if it is easy. Misogyny is not a joke. Being shut down. Social media comments symptoms not cause. How politicians and leaders talk about Irish language makes me vulnerable. Media presentation. Lundy traitors. Responsibility with media for ills. Wife and mother first. Forcing women through pregnancy when they have been sexually assaulted. Change will be bottom up. Willingness to see change. Reluctance to see society change. Reluctance to acknowledge misogyny. Sometimes things are worse for one group.

Social media as a sectarian tool. Sectarian language. Burnt out of your home. Not Orange or Green. Racism not called out. Headlines once and then it will die a death. People scared to speak out. Sledgehammer. Chipping away. Rights. Be protected as women and part of civic society. Any good thing that happens to a woman a man will benefit from it.

1hr 21 minutes – What you should be looking at. Getting the right information. Where to find the women online. The women’s sector output. Shankill Women’s Centre. East Belfast Mission. Women’s Sector Lobbyist. WRDA website. Evidence led ‘Feminist Recovery Plan’ – 36 policy experts from 25 organisations have written the plan. Check out the Raise Your Voice project.

Thanks to the women, to Kirsten Elder for editing, to SCI, and to you all for watching.

If you liked this group interview you should watch my interview with four veteran journalists here: IN CONVERSATION WITH SUSAN MCKAY, FIONNUALA O CONNOR, ANNE HAILES, AND MARY KELLY

And: IN CONVERSATION WITH MAGGIE SWARBRICK journalism lecturer.