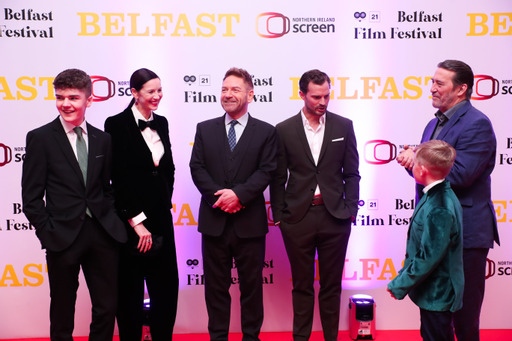 The life of a freelance journalist is precarious but never dull and is full of variety which I love.

On Wednesday evening as I was settling down with popcorn to watch a press screening of Sir Kenneth Branagh’s new film Belfast I had to sort out quotes for a story I was writing on beef carcasses and Brexit. I got that sorted and then down to the movie.

Belfast people are a cynical bunch and we know our own story so well that when it’s told on stage or screen or in any form of media we brace ourselves for hating what we are about to read, see or hear. It’s just the way we do things.

Most journalists starting position is one of being unimpressed by everything. We’re a tough crowd. But I have to say I was pleasantly surprised by the movie.

It would be easy to pick holes in it, that’s our national sport, but I wasn’t in the mood for that.

Jude Hill steals the show. What a bright, talented little boy, with a great career ahead of him.

I am not going to do an in depth review here. I will let you decide for yourselves. So, movie watched. My verdict. I liked it. Now I was ready for the red carpet.

The verdict! I liked it! I am a #Belfast woman so I had anxiety when I first heard about the movie. Some won't like it but there is much to commend. Jude Hill is a wee star. Ciaran Hinds is good in everything, and it was good to see Jamie Dornan so relaxed. A good wee film. pic.twitter.com/0iUUg7uWLy

I caught up with the director and some of the stars of the film ‘Belfast’ ahead of the Irish premiere in the Waterfront Hall on Thursday evening to open the 21st Belfast Film Festival.

I donned my red Cardi B trainers and my red face mask for the red carpet occasion co-hosted by Northern Ireland Screen and Belfast Film Festival.

It was cold (we are near the river so it’s usually Baltic, and it is November). It was a buzz.

Here is an outline of my chats with Jude Hill, Sir Kenneth Branagh, Ciarán Hinds, and Jamie Dornan.

Jude Hill is a lovely boy. He is relishing his red carpet moment. Full of energy and enthusiasm, and what a cracker big smile.

He’s brought to my spot in the media pen and he’s brimming with confidence.

“I’m rockin’ the green for the Belfast premiere. Mum and dad picked it out and it feels really, really good,” he says.

On Jude’s observations about Belfast he says it is “a really nice, welcoming community”.

“It’s a big community at that,” he tells amanda.ie “I think this city is just home for a lotta lotta people.”

He was like sponge soaking up all the knowledge he could from the adults around him, he told me.

“I asked them for everything,” he said.

“I remember getting a tip from Jamie about how to learn lines quicker and that was really, really helpful. You have to take it sentence by sentence or paragraph by paragraph, and that really helped me learn the lines for Buddy.”

On his future screen ambitions he says his dream part “would probably be a role in The Avengers, because I am a massive Marvel fan.”

⭐️Jude Hill is a wee star. He says he’s “rockin’ the green” new suit his parents got him. He tells me Jamie Dornan gave him great tips for learning his lines, and in the future he would like a role in The Avengers! pic.twitter.com/H3GLM1fcWr

Sir Kenneth Branagh is nursing a cup of tea on the red carpet. It’s cold out here. How does he feel about the city.

“It’s something this film is a conversation about.

"It seemed to me the time that I spent here with my family was the time I associate, without mere nostalgia without craving sentimentality, I just felt I knew who I was. I had an utterly totally settled sense of my relationship with the world. I knew how I fitted in. And when I left it was an uprooting I haven’t really rebalanced still.

“And so, I have had an incredible life journey since then, but there is something about this place that inbuilt in its character is a very strong sense of identity. Sort of an invitation to claim it, own it, your home, like through a stick of rock, so when you leave that or lose that I think you can have a troubled time.

“And also I associate it with everything that went on subsequently so I think you end up being, as I was, consciously and sometimes unconsciously preoccupied with it, but wanting to come back.”

Obviously he wants everyone to like the film and to approve of it himself but was there anyone in particular he wanted the seal of approval from for the film.

His family, he says. “It was important they approved".

“Then I was actually quite tentative about trying to raise money for it.

“Inevitably in doing so it went round the world, and in that beginning to understand there is seemingly no barrier between people and this story.

“So what I was thrilled by is people got Belfast. They got the working class environment. The accents were no issue. The parameters of the story were no issue. People leant into understanding as much as they wanted to about the Troubles and how it affected these characters. I began to understand it was picture looking outwards, not looking inwards.”

On what Ken learned from the process he said: “Some of the covid by-products were you had less time to get caught up in the chaos of things.

“It was quite a ritualistic thing that allowed all these little sort of moments.

“There was a more slightly reverential hush to things that allowed for a different kind of listening. Jude’s performance is mostly listening. I felt like I listened more as a director that I have ever done before.”

I was so pleased to have the chance to speak with another north Belfast man Ciarán Hinds.

I reminded Ciarán that when I interviewed him in 2014 for the Belfast Telegraph (after he received an honorary degree from QUB for services to film and drama) he told me he was glad during his visit to observe that Belfast “has still got the same soul”.

He laughs, and tells me it does, and of getting to see his sisters while being back in Belfast. I of course immediately interrupt to fangirl about Bronagh Hinds. “Bronagh is extraordinary,” he says.

And in the way proud brothers do he tells me about the long overdue honour she received last month for her work with the Women’s Coalition and more. Read about it here: https://www.qub.ac.uk/bronaghh

Back to soulful Belfast.

“It’s amazing to see how developed it is since I was last aware of being in the centre of town, because I would just go to family usually.”

He spoke about enjoying working with Dame Judi Dench and Jude Hill so closely.

“Just to have those two either side of you. Judi is a bit of a rebel. She’s feisty and she’s funny and so honest.

“And Jude is so good. And Ken has guided him well.”

He hopes the home audience in Belfast will view the film very positively.

I raise this with Jamie Dornan when he is in front of me.

I tell Jamie that as a Belfast woman I was nervous when I saw the trailer, and worried about what the film would be like, but after I saw it thought “actually this is good”.

He laughs. “That sums up exactly our feeling…because we are all so ready to be cynical.”

Every job brings learning for Jamie and for ‘Belfast’ he saw the conflict from perspectives he hadn’t really considered before.

“And I have sort of really never let myself try to understand how it affected every day, working, normal people.

“You were always looking at it from a very politicised, paramilitary point of view, sectarian point of view. Certainly never through the eyes of a nine year old boy, and through a normal family caught in the middle of it.
“That was all new to me, that territory.”

I tell him about a quote attributed to the actor Stephen Rea talking about the city of Belfast: “It’s like an ugly child, you love it the most.”

It sums up very well how a lot of us feel about the complicated, wonderful, frustrating, place we are from.

Jamie laughs and tells me he doesn’t think he can top what Stephen Rea said and goes on to share his feelings for the city.

“No matter where I live in the world, or who I met, or where I go, whatever, this is home.

“The people here, and the vibe of the place, and what everyone has been through, and the collective resilience, and the humour of the people is everything to me. It really truly is.

“And I love it. And I will forever try to tell stories from this part of the world.”