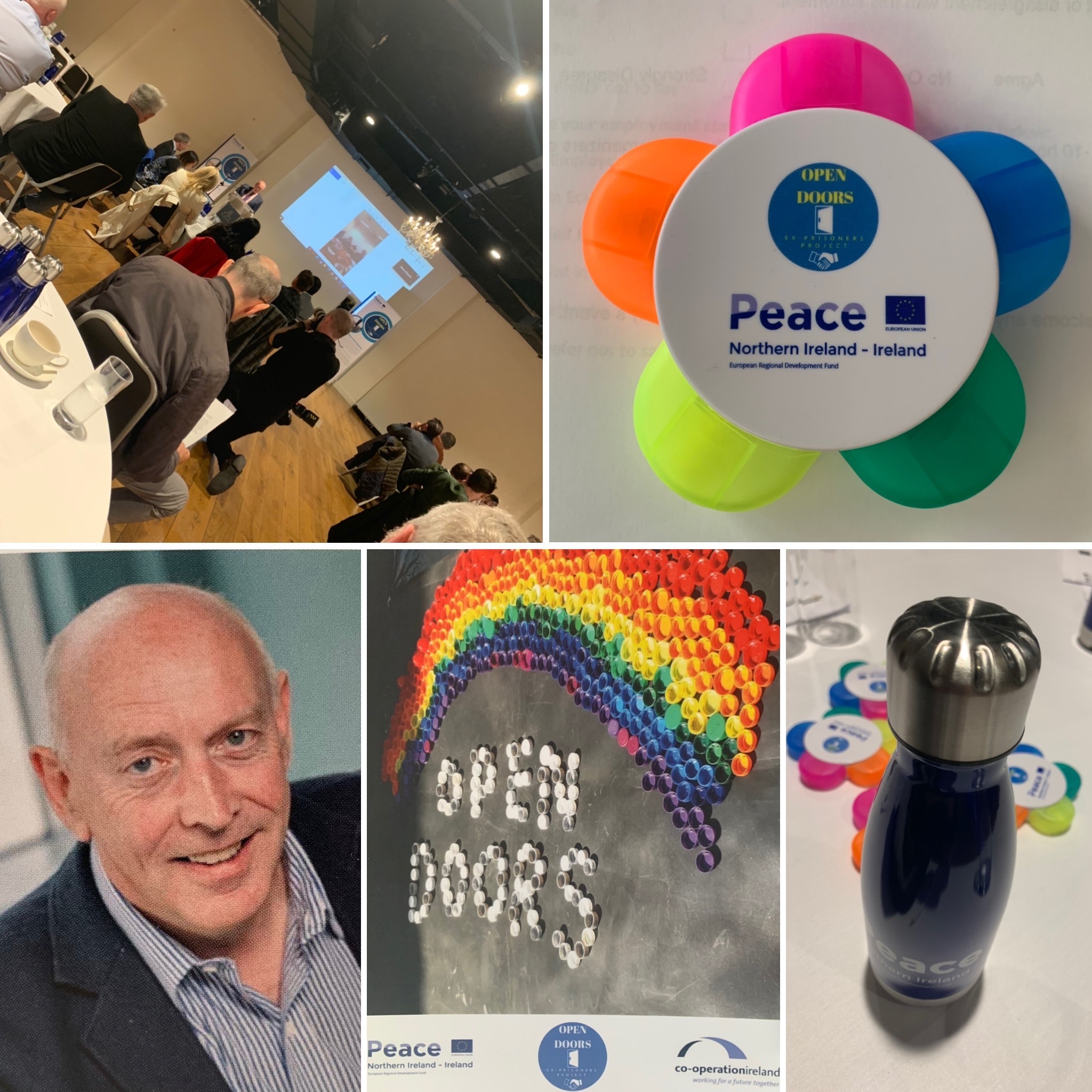 We cover Open Doors, what he learned from the project, the benefits to the individuals and society. Challenges facing the ‘ex-prisoner/former combatant’ community, conditions for participation in the programme, armed groups not currently engaged in the peace process, UK amnesty proposals, the Armagh centenary service (he is going) the Queen and the President (both Cooperation Ireland patrons) are not. Challenges faced and criticisms of policing, the PPS and the justice system. And does he miss being in the police?

I headed along to a Cooperation Ireland conference in Belfast today for the closing event of ‘Open Doors’, a three year £1.6m programme funded by the SEUPB, The Executive Office and the Department for Rural and Community Development.

It was delivered by Co-operation Ireland alongside Charter NI, the Ex-Prisoners Interpretive Centre (EPIC), Teach Na Failte and the Plough Historical and Cultural Group to ‘build relationships and promote acceptance’.

He says the media was right to challenge it on funding ex-prisoner groups, and highlights that among participants there was “people who let us down but a greater number who wanted to do the right thing”.

He says the project “speaks to the possibility of peace, and reimagining relationships”.

As I sat making notes former loyalist and republican prisoners mingled and chatted over lunch and could be heard making arrangements to catch up or collaborate on projects.

Peter, a former RUC and PSNI assistant chief constable, I first met as a student journalist, sits down with me for a chat.

So, what did he learn from the project?

“I learned there are people who genuinely want to move on in the ex-prisoner community. They find it difficult. They still remain stigmatised. There are challenges to their families.

“I gave the example today of grandchildren of former ex-prisoners who are not able to travel and get jobs because of their family history.

“So all of that stigma is still there and still has to be dealt with, but I genuinely learned there are people who want to move on and help society to move on.”

On the benefits to the individual he speaks of the outreach clinics helping to deal with day to day challenges of life, sharing experiences of prison life which could help others, the positive impact on mental health, and being supported to be a positive part of the community.

On the benefits to society of the project: “The United Nations constantly said that there is widespread acknowledgement in academic and policy literature, ex-combatants are a critical part of a peace process.

“And so we still haven't got to the end of this yet. That role that ex-prisoners played are as equally effective to the peace process as other parts of it.”

Peter says he understands why some people might be short on pity for ex-prisoners.

“I absolutely can. I know people can say ‘these are choices people made’ and I fully acknowledge that.

“They were choices people made perhaps if there wasn't a conflict in Northern Ireland they would never had made.

“I don’t believe that is the case. I believe there are lots of people who are ex-prisoners probably would never have been ex-prisoners if it wasn't for the conflict in Northern Ireland.

“So, there is a responsibility to the peace process to assist that transition.

“Of course there will be set backs in the middle of it, we saw it in the middle of this programme, which caused problems for the project, but when you look at it on balance there were far more benefits, far more good than the negativity.

“The very fact that even during covid 8,000 meals were provided by ex-prisoners across this community, over 200 outreach clinics that helped people in terms of mental health, so far more benefits than the negative.”

Some of the issues for the ‘ex-prisoner/former combatant’ community are stigma, their families travel and opportunities being limited, struggling to get work, mental health issues, PTSD, depression and substance abuse.

On the conditions for participation in the programme Peter says “part of the agreement is people have to want to progress”.

“Where there are challenges, how they as a group or organisation, deal with those challenges.

“In some of the negative events there was a responsibility on the group to deal with it, to demonstrate commitment to the peace process.

“We have a set of agreements that people abide by and they won’t get funded unless they abide by those.”

On a point raised during the conference about armed groups not currently engaged to the peace process Peter talks about the importance of dialogue.

“That is how you resolve things. As John Lonergan, the ex-Governor of Mountjoy prison pointed out, ‘if you don’t talk to people and engage with people’…

“And they are measured risks. We are not naïve around this. And we are very careful.

“It is funded by the Special EU Programmes Body. And we are very careful how that funding is distributed. And that it doesn’t end up in the wrong place with people buying drugs or whatever else, but it is properly monitored, properly audited, that it goes to the right places.”

He added: “We are not a funding body. We are the delivery body. If we are going to take a lead role we will engage with the groups and organisations but they will have to abide by the rules and the agreements that are in it.

“There are commitments in it, and if people breach those commitments, then the funding body SEUPB will have every right to say we are not funding you any further, we are stopping the funding.”

QUB lecturer Dr Anna Bryson joining us by Zoom as is the way of the world these #covid19 days. @cooperationirl pic.twitter.com/fQIUrwQOUC

He says among those Cooperation Ireland is working with there is “a mixed view as you get across society” towards the UK government legacy proposals which is effectively an amnesty on pre-1998 criminal prosecutions, and closes down inquests and civil actions.

“Some people want this over and done with, some people don’t trust the British government’s motives in it, so there is a whole mix of what you would hear out in society and this is no different.”

Does he believe there are some who would welcome the amnesty?

“I think there probably are. They are probably not saying it out loud but I can imagine some people saying ‘it will give me peace and my family peace in the future if we know this is over and done with and I am not waiting on a knock on the door’.

“I think that human nature would tell you that.”

As I am sat in the conference news breaks that the Queen will “on medical advice’ no longer be attending the Northern Ireland Centenary church service in Armagh (Thursday 20th) - which has proven deeply controversial, and President Michael D Higgins declined an invite to.

Cooperation Ireland’s two patrons are none other than the Queen and the President so I ask Peter about it. Is he going to the service, and if so, why?

“Yes, I am going to the service in Armagh tomorrow. First of all, we are an organisation that is all-island but is about three relationships – the British Irish, the North South, and the internal relationships in Northern Ireland.

“Maybe there is a time for us to sit in a church service and reflect on things that is not about politics, and maybe there might be a greater good comes out of that than all of us see at this minute in time.”

On the President declining his invitation and the Queen no longer attending: “The President has made his decision and given his reasons why he is not attending so I fully accept that.

“Her majesty the Queen is not going. I have to accept people’s bonafides on what they say.

Unfortunately it is not what the organisers, I suspect, wanted, but nevertheless it is what it is and I suppose it is indicative of some of the challenges we still face.”

At the end of April I took part in a Cooperation Ireland podcast series about the centenary which you can listen to here:

What was Peter’s takeaway from people’s views on it.

“Again, it is a mixed view of it. For some people partition was a tragedy and therefore ‘we want nothing to do with it, we want to forget about it, see you’, for other people it is a cause of the formation of Northern Ireland which is a cause of celebration.

“That is just the reality of the diverse nature of this place and we have to be willing to accept our neighbour might have a different view from us.”

On the challenges faced and criticisms of policing, the PPS and the justice system he says: “I am sure both the police and the PPS wouldn't want those comments so the fact they are made isn't particularly helpful. I imagine the director of the PPS and the Chief Constable genuinely believe they are making the right decisions for the right reasons but then it gets caught up in the politics of things.’

Does he miss being in the police? He smiles.

“Not enough that I want to go back. I miss the people.”

For more about the work of Cooperation Ireland visit: https://cooperationireland.org

COMING SOON to Amanda.ie: I sat down at the Open Doors event with loyalists Colin Halliday and Jackie McDonald for a chat about Brexit, the protocol, loyalism, paramilitarism, criminality, threats of violence, the state of the union, identity, a border poll, the upcoming Assembly election, and more... 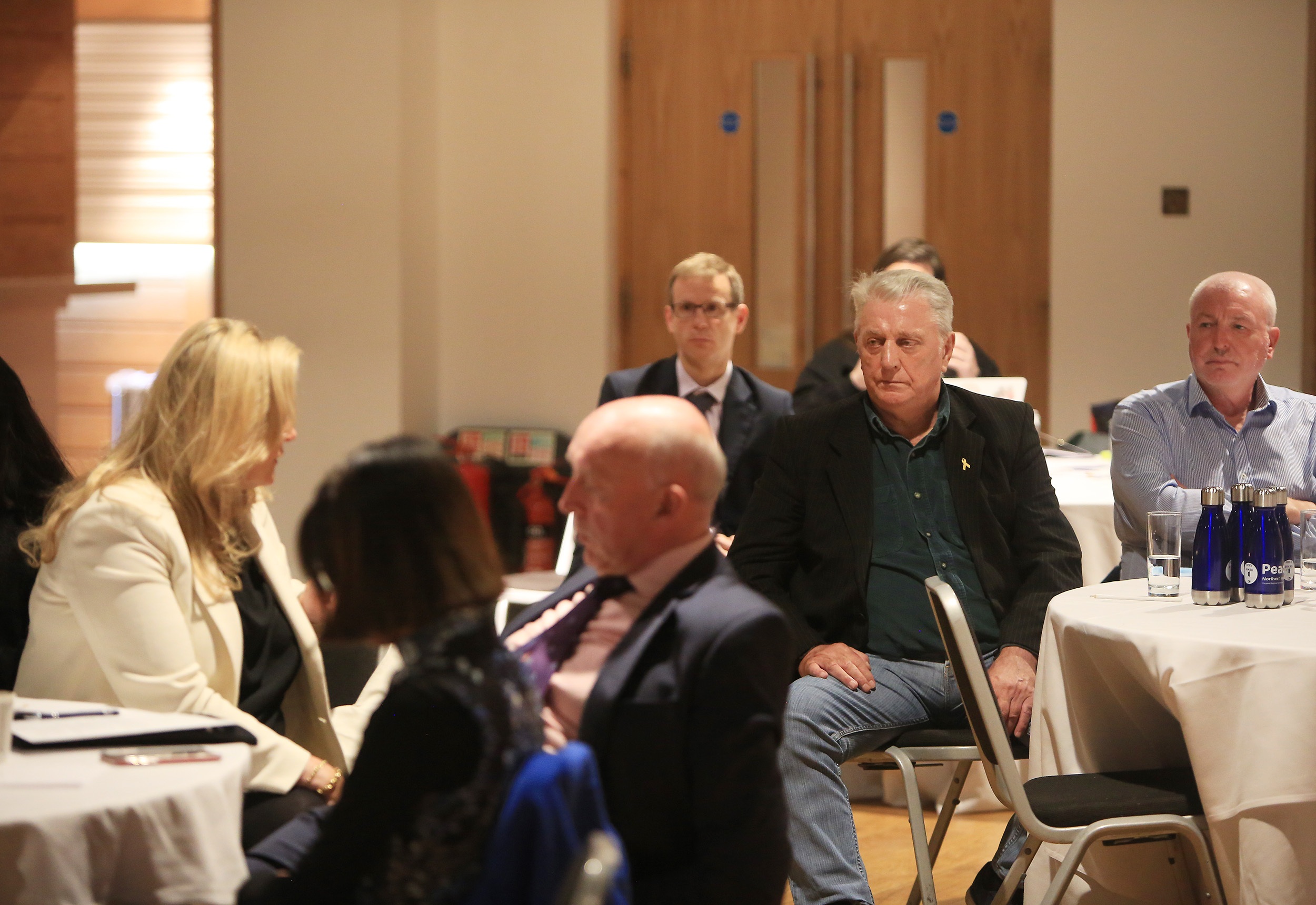